Grand Ayatollah Ali al-Sistani said religious authorities have a role in protecting Iraq’s Christians, and that Christians should live in peace and enjoy the same rights as other Iraqis. The Vatican said Francis thanked al-Sistani for having “raised his voice in defence of the weakest and most persecuted” during some of the most violent times in Iraq’s recent history.

Al-Sistani, 90, is one of the most senior clerics in Shia Islam and his rare but powerful political interventions have helped shape present-day Iraq. He is a deeply revered figure in Shia-majority Iraq and his opinions on religious and other matters are sought by Shias worldwide.

The historic meeting in al-Sistani’s humble home was months in the making, with every detail painstakingly discussed and negotiated between the ayatollah’s office and the Vatican.

Early Saturday, the 84-year-old pontiff, travelling in a bullet-proof Mercedes-Benz, pulled up along Najaf’s narrow and column-lined Rasool Street, which culminates at the golden-domed Imam Ali Shrine, one of the most revered sites in Shia Islam. He then walked the few metres to al-Sistani’s modest home, which the cleric has rented for decades.

A group of Iraqis wearing traditional clothes welcomed him outside. As a masked Francis entered the doorway, a few white doves were released in a sign of peace. He emerged just under an hour later, still limping from an apparent flare-up of sciatica nerve pain that makes walking difficult.

The “very positive” meeting lasted a total of 40 minutes, said a religious official in Najaf, who spoke on condition of anonymity because he was not authorized to brief media.

The official said al-Sistani, who normally remains seated for visitors, stood to greet Francis at the door of his room — a rare honour. Al-Sistani and Francis sat close to one another, without masks.

The official said there was some concern about the fact that the Pope had met with so many people the day before. Francis has received the coronavirus vaccine but al-Sistani has not.

The Pope arrived later in the ancient city of Ur for an interfaith meeting aimed at urging Iraq’s Muslims, Christians and other believers to put aside historic animosities and work together for peace and unity. Ur is the traditional birthplace of Abraham, the biblical patriarch revered by Christians, Muslims and Jews.

“From this place, where faith was born, from the land of our father Abraham, let us affirm that God is merciful and that the greatest blasphemy is to profane his name by hating our brothers and sisters,” Francis said. “Hostility, extremism and violence are not born of a religious heart: they are betrayals of religion.”

Religious leaders stood to greet him. While Francis wore a mask, few of the leaders on the tented stage did. The meeting was held in the shadow of Ur’s magnificent ziggurat, the 6,000-year-old archaeological complex near the modern city of Nasiriyah.

The Vatican said the historic visit to al-Sistani was a chance for Francis to emphasize the need for collaboration and friendship between different religious communities.

In a statement issued by his office after the meeting, al-Sistani affirmed that Christians should “live like all Iraqis, in security and peace and with full constitutional rights.” He pointed out the “role that the religious authority plays in protecting them, and others who have also suffered injustice and harm in the events of past years.”

WATCH | Pope Francis visits Iraq in his first trip during the pandemic: 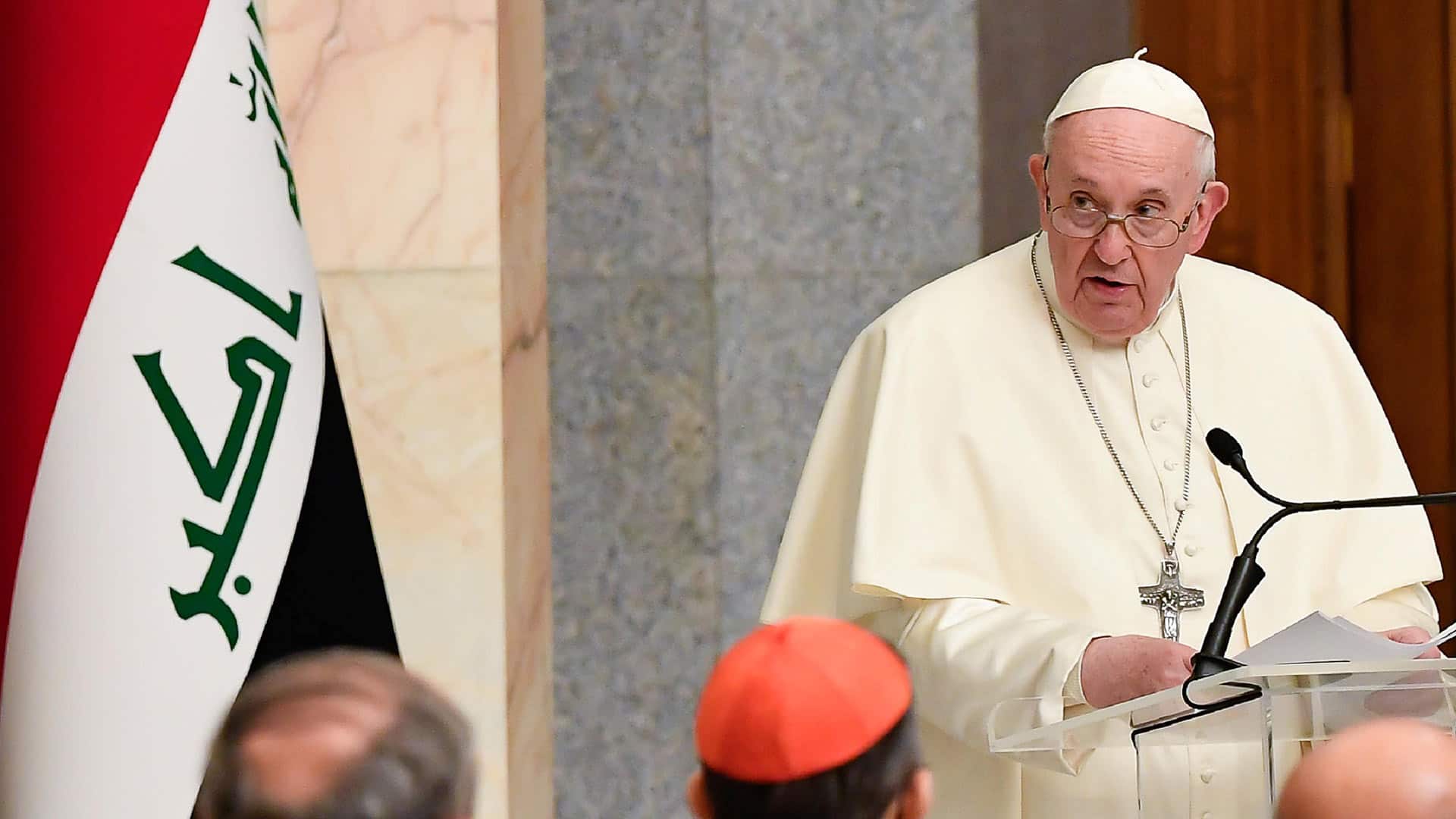 Pope Francis is on a historic visit to Iraq despite the global pandemic. After a year of laying low in Vatican City, he’s resumed his travels with a message of unity for a country ravaged by religious violence. 2:04

Al-Sistani wished Francis and the followers of the Catholic Church happiness, and thanked him for taking the trouble to visit him in Najaf, the statement said.

For Iraq’s dwindling Christian minority, a show of solidarity from al-Sistani could help secure their place in Iraq after years of displacement — and, they hope, ease intimidation from Shia militiamen against their community.

“We welcome the Pope’s visit to Iraq and especially to the holy city of Najaf and his meeting with Grand Ayatollah Ali Al-Sistani,” said Najaf resident Haidar Al-Ilyawi. “It is an historic visit and hope it will be good for Iraq and the Iraqi people.”

Francis arrived in Iraq on Friday and met with senior government officials on the first-ever papal visit to the country. It is also his first international trip since the start of the coronavirus pandemic, and his meeting Saturday marked the first time a pope had met a grand ayatollah.

On the few occasions where he has made his opinion known, the notoriously reclusive al-Sistani has shifted the course of Iraq’s modern history.

In the years after the 2003 U.S.-led invasion he repeatedly preached calm and restraint as the Shia majority came under attack by al-Qaeda and other Sunni extremists. The country was nevertheless plunged into years of sectarian violence.

His 2014 fatwa, or religious edict, calling on able-bodied men to join the security forces in fighting the group Islamic State in Iraq and Syria (ISIS) swelled the ranks of Shia militias, many closely tied to Iran. In 2019, as anti-government demonstrations gripped the country, his sermon lead to the resignation of then-prime minister Adil Abdul-Mahdi.

Iraqis have welcomed the visit and the international attention it has given the country as it struggles to recover from decades of war and unrest. Iraq declared victory over the Islamic State group in 2017 but still sees sporadic attacks.