Sarah Mitton has stood alongside good friend and teammate Brittany Crew each day in their journey to the Tokyo Olympics this summer. She says Crew’s “hard, honest work” has been noticeable, especially since the end of last summer, with an intense focus on training and nutrition.

“She moves much better in and out of the [shot put] circle, all without losing an ounce of that explosive power needed to hurl a shot 19-plus metres,” Mitton told CBC Sports this week. “She’s always been a fairly confident woman, but she seems much happier in her own skin.”

Crew spent the final two months of the pandemic-shortened 2020 season gaining confidence throwing consistently over 18 metres, achieving the feat at nine of 11 outdoor events in Ottawa, Quebec and near Toronto in August and September.

Away from the track, the 26-year-old cut out alcohol and snacking late at night in her small basement apartment in Toronto. And with coronavirus making shopping difficult, the 2016 Olympian stopped spending up to $200 a week on groceries and takeout – “Throwers eat a lot,” she said – and switched to the HelloFresh and Goodfood online, home meal services.

“I was 264 pounds in October, 253 at the end of November and I’m currently 248 to 250,” said the 2019 Pan Am silver medallist. “I feel like this will be my best weight to compete at and now the focus is to maintain my weight and try to add muscle [while] hopefully lose body fat in the process.

“I feel better about myself and I’m able to move more freely in the weight room and during sprints and plyometric sessions.” 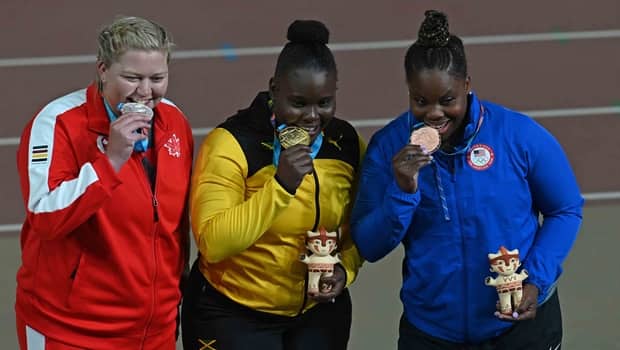 The 25-year-old set a new Canadian record with her throw of 19.07m as she captured a silver medal in the women’s shot put event at the Pan Am Games. 0:47

While Crew spends an extra $30-$50 for the convenience of having groceries delivered, given her busy schedule at the Toronto Track and Field Centre at York University, picking recipes online has made eating healthy easier.

I can’t wait to use this new body of mine in Tokyo.— Canadian shot putter Brittany Crew on finding an optimal weight for Olympic competition

“The groceries come with the exact ingredients needed and a recipe card, so I no longer waste food or think about what I’m going to make for dinner,” said Crew, the Canadian record holder with a throw of 19.28 metres.

“Being cooped up in your home [during the pandemic] can cause you to eat out of boredom, but you can lose weight without exercising.

“Nutrition has been the missing piece of the puzzle for me,” continued Crew, “and I can’t wait to use this new body of mine in Tokyo.”

Said Mitton: “Every step of the way she celebrated the small victories that ultimately led to where she is now, and I believe she has set herself up extremely well for the Olympics.”

After setting the national mark of 18.81m at the Ontario indoor championships in Toronto last Feb. 8, Crew spent the early days of the pandemic living with her uncle, aunt and two cousins in their Breslau, Ont., farmhouse.

Crew’s uncle built a shot put circle on his property after learning Mitton’s dad made a circle in their garage for throwing into a tarp. Crew also turned her family’s living room into a small gym, complete with dumbbells her uncle had in the basement and weightlifting plates she borrowed from a former high school teacher.

While she enjoys any chance to compete, don’t expect to see the world No. 6 shot-putter’s name on an entry list at one of the World Indoor Tour competitions scheduled for Europe in February and March.

“It doesn’t make sense with the 14-day mandatory quarantine when returning to Canada,” Crew said. “Why would I risk losing two weeks of training on the road to Tokyo?

“The only meet we know the date of is the Olympics [starting July 23]. We are hoping to get vaccinated as soon as possible to start travelling to competitions leading up to Tokyo.”